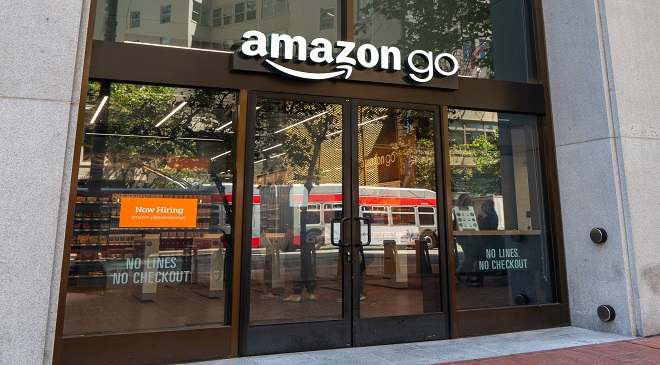 The opening of the first Amazon Go cashierless grocery store in the UK is perfectly timed to reduce physical contact during the pandemic, says ParcelHero

The online giant Amazon is launching its first ‘brick and mortar’ shop in the UK. It may be a physical store but there is no need for any actual physical contact – Amazon Go stores are contactless and cashierless.

The home delivery expert ParcelHero says the launch of the first Amazon Go store in the UK is perfectly timed to help customers during the current pandemic, as the shop has no cashiers to pay or screens to touch. Shoppers simply walk in, take the items they need and walk out.

ParcelHero’s Head of Consumer Research, David Jinks MILT, says the opening of the Amazon Go store in Ealing, West London, could be as early as this week.

‘Amazon decision to introduce till-free stores wasn’t due to the pandemic. In fact, it has been trialling the technology since 2016 and opened its first Go store to the public in the US in 2018. However, the impact of Covid created the impetus for the company to open its first contactless store outside the US.

‘Shopping at Amazon Go stores looks set to become one of the safest shopping options outside of having groceries delivered direct to your home. The first step is to download the Amazon Go App, which is now available on Apple and Android for UK users.

‘Once at the store, shoppers hold their phone screen to a scanner at the gate to open it. Anything they take from the shelf is automatically added to the virtual cart. When they have finished shopping, they are good to go – there are no queues, machines or checkouts. Providing shoppers keep their distance from each other, there is no need for any physical contact in the store.

‘ParcelHero advises shoppers not to pick up items for any other shopper, even if they are having trouble reaching. It may seem impolite, but you could find yourself charged for the item.

‘Amazon has a long-standing relationship with UK supermarket chain Morrisons, which supplies the Amazon Fresh grocery delivery service. It is highly likely that Morrisons will be key to the stocking and logistics behind the new Go store. Amazon also owns the grocery chain Whole Foods. Its Richmond branch is just five miles from Ealing, so there are likely to be ongoing potential synergies.

‘The Mail on Sunday, which broke the news of the UK Go store, reports Amazon has plans for 30 more stores across the country. However, Amazon is not the only retailer to see the benefits of contactless shopping. Tesco, Sainsbury’s and the Co-Op have been trialling ways to eliminate the shopping queue. For example, the Co-op’s Pay in Aisle App was launched in 2018 and Sainsbury’s trialled a cashierless store in London’s Holborn Circus in 2019.

For more information on cashierless trials in the UK and other retail initiatives such as paperless receipts, see: https://www.parcelhero.com/research/study-stamping-out-receipts