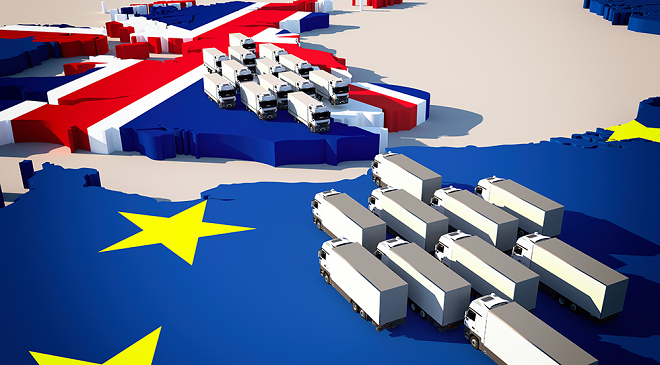 Break bulk services are not a new phenomenon in the express delivery industry, but since the UK announced it would leave the European Union and its single customs union, there has been a significant upswing in interest.  Where speed of cross-border delivery is key, break bulk can reduce paperwork and potential delays at the border as well as cut shipping costs.

At Logistyx Technologies, we have seen a 250% increase in customers using or close to implementing break bulk services as they try to cut Brexit-related cross-border shipping costs and paperwork.  Interest has come from manufacturers of both industrial and consumer products.

How does break bulk work?

Break bulk services involve consolidating multiple individual shipments onto one waybill at the point of origin to create a single consolidated shipment.  This then crosses the border and clears customs as a single entry, with a single invoice, reducing the chance of delay at the border as there is only one set of paperwork.   Once on the other side, the consolidated shipment is broken down into separate shipments for final individual delivery to multiple addresses in different destinations within the customs union.

Although break bulk services have existed for some time, particularly for companies shipping from the EU into Norway and Switzerland and vice versa, we have seen interest growing over the last two to three years since plans for Brexit were on the horizon.

Companies are looking not just to achieve cost savings, which help to offset newly introduced customs duties and taxes resulting from post-Brexit arrangements, but also to simplify customs documentation. With break bulk there is just one set of paperwork to be processed.

This interest in break bulk services has continued in the weeks after the transition period ended on January 1st.

For large shippers that ship multiple items, the economics of break bulk are evident, achieving a significant reduction in the quantity and cost of paperwork.  If 50 individual shipments are consolidated into one break bulk shipment, there is only one set of paperwork to clear customs, meaning less chance of delay at the border.  With carriers charging a fee for each export shipment, the savings opportunities are clear, and having to check only one carrier invoice also means less work for the finance department.

Logistyx’s cloud based TMS for parcel helps shippers ensure their labelling and documentation can support this and has seen customers achieve savings of more than 25% on their transportation costs by switching to a break bulk service rather than sending shipments individually.  For one customer, the goods are picked up from their UK facility before shipping in bulk to the Netherlands, where they are broken down for delivery across the EU.

Individual carriers are promoting their break bulk services alongside paperless invoicing, which involves uploading all shipment data before the physical shipment arrives at the border.  This allows the customs process to start immediately, expediting the procedure.

Demand for paperless invoicing has grown tremendously over the last twelve months, and it looks increasingly likely that carriers will start to introduce surcharges for shippers who don’t move to paperless, as they will need to employ more staff to process orders for customers who rely on physical paperwork.

The other benefit of using the break bulk approach is you get fewer headaches when things go wrong.  If there is a problem at the border, having one large break bulk shipment also means you will only have one problem to solve. Multiple issues can arise if you are transporting many individual shipments, which can slow things down and soak administrative resources.  With new customs and border processes likely to take time to bed in since Brexit, minimising delays and administration costs for sending shipments into and out of the EU customs union is a big priority for shippers. Break bulk services look set to take a larger share of the market.