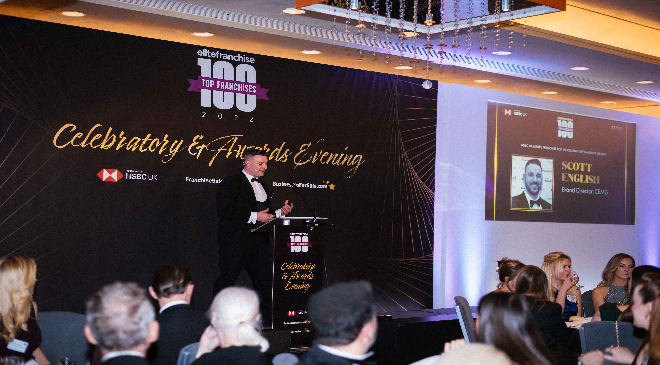 On Thursday 10th March, franchisors from across the nation attended a lavish ceremony at the Hilton London Kensington, to celebrate being named one of the UK’s top 100 franchise brands. The Elite Franchise Top 100 (EF100), in association with HSBC, recognises the finest franchisors, from established brands, international arrivals and emerging home-grown businesses.

Now into its sixth year, the EF100 ranks those franchisors that have been identified as being exceptional across a broad selection of criteria, including the innovative measures they’ve initiated to guide their network of franchisees, as well as their ambitions and prospective growth targets in the next financial year. Entrants were also judged on their position in the marketplace and their inventive and adaptive strategies that have seen them emerge strongly from a period of economic instability.

For the second consecutive year, domiciliary care provider, Home Instead, ranked number one in the prestigious list. CEO, Martin Jones, had this to say, “The innovation and ability to act from the team behind me and our franchise owners is what has made these two years possible. Franchising is such an invigorating, exciting and rewarding industry and I’m very excited for us to push on and really demonstrate what more we have to offer in this sector.”

In addition to celebrating the UK’s top 100 brands, the event was an opportunity for several stand-out awards to be presented. Automotive tool giant, Snap-on Tools, scooped the HSBC Exceptional Performance award for the second year running. Judges highlighted the brand’s introduction of a revolutionary franchise package for the next generation, as well as its investment into infrastructure and technology which had propelled its franchisees’ businesses forwards.

Placing third in the EF100, business coaching franchise, ActionCOACH, received the Elite Franchise Franchisor of the Year Award for the exceptional support shown to its entire network which facilitated seismic and continued growth of the business. Julie Wagstaff, Managing Director of ActionCOACH UK said, “We’ve worked hard to make sure our franchise partners continue to grow and be supported during this turbulent time. With more clients than ever reaching out for help, we will continue to help them thrive. Receiving this award is a fantastic achievement for the entire ActionCOACH UK support team.”

“We continue to be astonished by the productivity and progressive outlook of the business owners in this industry,” said Andrew Brattesani, Head of UK Franchising at HSBC. “The franchise industry demonstrated spectacular togetherness and innovation throughout the pandemic, but those who have won awards tonight have been especially impressive with their ability to pivot, grow and enhance all aspects of their entire franchise network and model. HSBC supported 900 franchisees to launch last year and, whilst hundreds of industries struggled to survive, the franchise industry’s cash reserve has risen from £200 million to £1.1 billion. It’s a clear indication of the industry’s trajectory and is why we supplied 17 years’ worth of lending in just 18 months to help the franchisors not only survive but, more importantly, thrive.”

Notably, Water Babies, the baby swim school, was recognised as the highest new entrant. Lingotot, the children’s language learning brand, was named ‘Rising Star’ after climbing a whopping 27 places from last year’s list. Special mentions were also given to Energie Fitness, Driver Hire, Subway, ActionCOACH and Home Instead, who were all commended for the incredible achievement of managing to hold their Top 10 rankings for five consecutive years.

Clive Sawyer, judge and founder of Encouraging Women into Franchising, added “The EF100 celebrates excellence across the entire industry and it’s an event I’m very proud to be a part of. Thousands of businesses around the country have shown fantastic resilience and defied the odds to achieve incredible productivity and profitability. The willingness of the industry to succeed is evident and it’s clear there’s never been a better time to be in franchising. To see how franchisors, franchisees and suppliers have come together to pivot, acquire new mechanisms for growth and altogether prosper is nothing short of remarkable.”