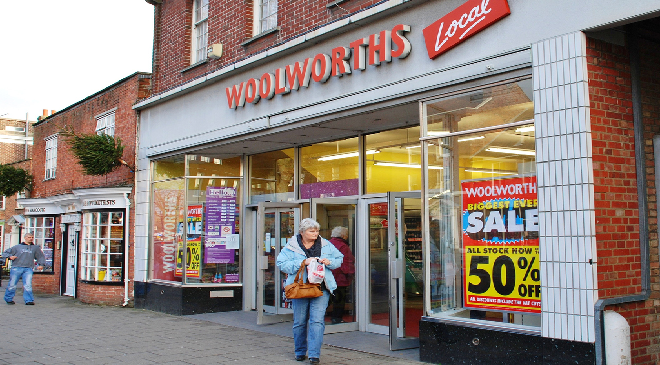 Despite the disappearance of many favourite names from our High Streets during the pandemic, we still miss Woolworths the most, finds ParcelHero. Some of the other lost stores we still yearn for may surprise you.

The latest research from the home delivery expert ParcelHero reveals that – for all the devastation Covid-19 has caused on our High Streets – a retailer that closed 14 years ago is the one we miss the most.

ParcelHero asked shoppers which stores they wish were still on our High Streets, and while some they listed only vanished during the pandemic, others closed their doors for the last time decades ago. ParcelHero’s Head of Consumer Research, David Jinks M.I.L.T., says: ‘Consumers are showing decreasing brand loyalty in the era of internet shopping, but still remain loyal to the memory of many former favourites.

‘Our respondents also listed many other familiar names that they wish were still on the High Street. Honourable mentions should go to BHS (the former British Home Stores) which closed as long ago as 2016, and the toy superstore Toys ‘R’ Us, which disappeared from the UK in 2018.

‘Three other retailers still had many Brits feeling nostalgic, long after their final closure. They deserve a special shout-out:

Blockbuster: the video rental store chain Blockbuster was once a vital part of people’s Friday and Saturday night plans. The famous blue and yellow stores closed in 2013, after the rise of streaming channels made hiring videos obsolete.

Athena: The card and poster store Athena disappeared way back in 1995 but is fondly remembered for its range of iconic posters. Remember that infamous tennis girl poster?

Tandy: A number of men who responded mentioned the electronics favourite Tandy, which closed in 2001. Back in the ‘80s it was a favourite place for buying graphic equalisers and 5-pin DIN plugs!

‘It’s interesting that most of the top 5 stores still have an online presence. Indeed, there was huge excitement over the fake launch of a new Woolworths site last year. However, ParcelHero has been warning about the dangers of a shift to online-only stores for some time. We believe a balanced ‘brick-and-click’ approach will be best for retailers and shoppers alike.

‘ParcelHero’s influential report ‘2030: Death of the High Street’ has been discussed in Parliament. It reveals that unless retailers develop an omnichannel approach, embracing both online and physical store sales, the High Street as we know it will reach a dead-end by 2030. Read the full report at: https://www.parcelhero.com/content/downloads/pdfs/high-street/deathofthehighstreetreport.pdf