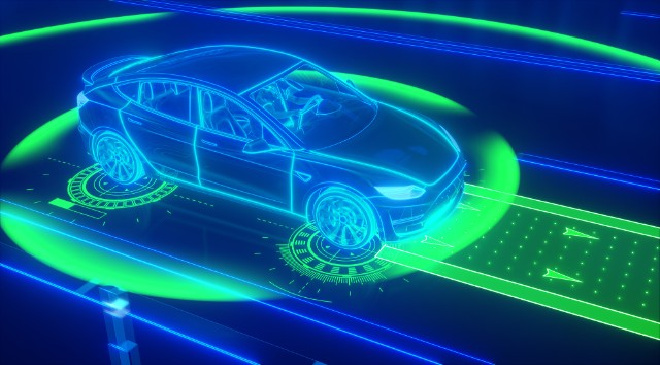 In autonomous vehicles, people are only passengers. The car steers independently and recognizes obstacles and dangers. Optical sensors replace the driver’s eye so that the vehicle can recognize its environment. A team of researchers at the Fraunhofer Institute for Photonic Microsystems IPMS in Dresden is developing microscanner mirrors (MEMS scanners) that can perceive their environment reliably and without interference while being small and integrable at the same time.

The vision of safe autonomous driving is thus within reach. The Fraunhofer IPMS will be presenting its latest developments to the general public at the world’s leading trade fair for the development and manufacture of electronics, Productronica, from 12 to 15 November 2019 in Munich.

A car drives around the corner, the passengers sleep in the back seat. The driver’s seat is empty. When a pedestrian unexpectedly crosses the road in front of the vehicle, it brakes automatically.

A scenario that can soon become reality on our roads. In autonomous vehicles, people are only passengers, the car steers independently and recognizes obstacles and dangers. To enable the vehicle to recognize its environment, LiDAR sensors are used to replace the driver’s eye. LiDAR means Light Detection and Ranging and enables distance measurement between object and vehicle. The principle is based on laser signals that are sent into the environment and whose reflection is analyzed.

A research team at the Fraunhofer Institute for Photonic Microsystems IPMS in Dresden has now developed microscanner mirrors (MEMS scanners) that can meet all requirements for autonomous driving while being small and integrable at the same time. The vision of safe autonomous driving is thus within reach. The research team is pursuing the approach of a “scanning eye” to enable digital vision in three dimensions. A micro-mirror module scans the environment by distributing the light of a laser in two dimensions. The third dimension of the light reflected by the object is determined by the detector signal. There are different methods, e.g. time of flight measurement, coded pulses or demodulation of FMCW signals.

Current LiDAR systems for autonomous driving are based on large rotating mirrors around an axis, which are difficult to integrate into vehicles due to their size and weight. Further disadvantages are the high manufacturing costs and the susceptibility of the rotating parts to vibrations and shock. This results in measurement inaccuracies which, in the worst case, can lead to system failure and accidents. Alternatives are so-called Solid State Lidar, which can do without moving parts and can be integrated due to their small size, but they can only detect objects at a greater distance with difficulty. Safe autonomous driving requires detection ranges from a few centimeters to several hundred meters.

“The special feature is that the MEMS mirrors developed by us reliably detect their surroundings over all ranges. In addition, they are so lightweight and can be integrated that, despite their mobility, they are not affected by vibrations in the car and thus detect their surroundings without measuring blur,” explains Dr. Grahmann, a researcher at the Fraunhofer IPMS.  “The scanner mirror designs of the IPMS thus fulfill both the requirements of mechanical mobility and the stability of a solid state LiDAR. In this way, autonomous driving can be safely implemented”. Since the MEMS scanner developed by IPMS is made of monocrystalline silicon, it is also extremely robust, shock-resistant and fatigue-free. Cost-effective semiconductor manufacturing processes enable scaling effects during manufacturing. The CMOS compatibility of the semiconductor chip also enables high integration capability into existing systems.